I remember that day very well, when everything changed: one day I had the support of the MCC and was able to import my medication from India. The next day the MCC took away my authorisation and my right to access generic medication. The registration of the patented product changed everything for me with just the stroke of a pen. Overnight I could no longer afford the treatment I needed to live.

Cancer medicines are unaffordable and out of reach for the majority of South Africans. Either they are too expensive for government to procure or they are so unaffordable that your medical scheme will not cover the full cost and you are pushed into financial death.

Patent laws and pharma monopoly is what is dictating whether you have a chance of survival – you have very little say in that. It is now time that we STAND UP and SPEAK UP – after all it is our lives at stake.

Four diverse cancer patients tell their stories about the controversial Lenalidomide Cancer Treatment Drug and how lack of access to the medicine has impacted their quality of life. Click on the images below for their stories. 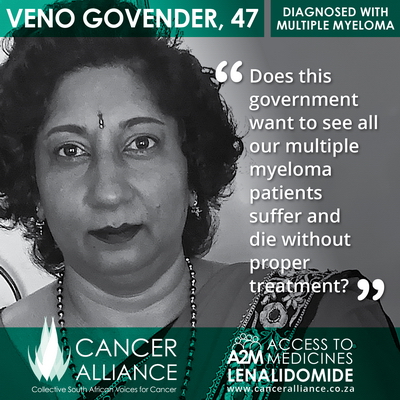 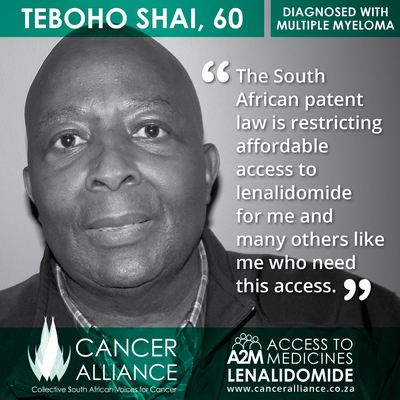 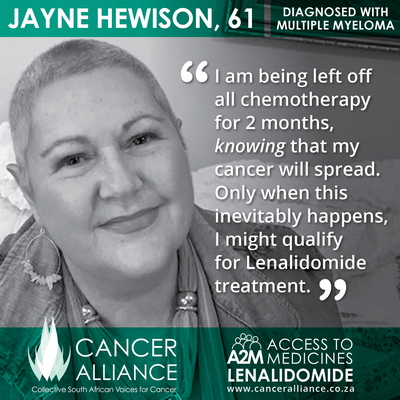 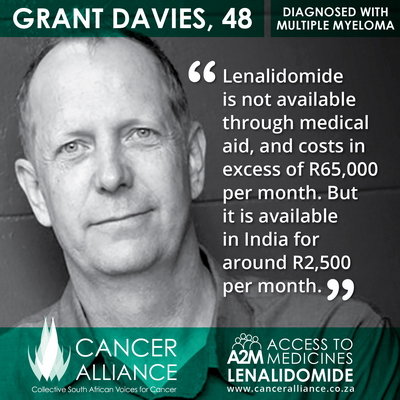 Many cancer patients in South Africa do not have access to affordable cancer medicines – many of which are available in other countries at a fraction of the price paid here. These patients are not getting the treatment that they need because our government routinely grants patents that could have been challenged and rejected. Patented medicines are expensive and potentially block access for the 84% of patients that are treated in the public sector.

South Africa’s patent system is geared towards monopoly holders and is at odds with the government’s constitutional obligation to take reasonable legislative steps to protect and promote the right to health of people living in South Africa. A revision in South Africa’s intellectual property policy could see the prices of medicines drop by as much as 90%.

In 2018 Cancer Alliance announced that it was turning its attention to eight medicines which will be the focus of a concerted two year campaign to change the path of cancer treatment in our country. 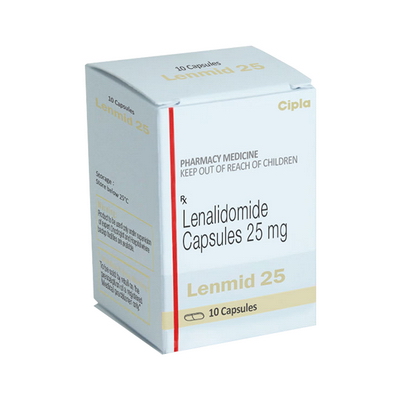 Now, one year later, we call for access to affordable access to lenalidomide and/or thalidomide. This medicine is used for the treatment of Multiple Myeloma.

Celgene acquired the exclusive worldwide rights to thalidomide in 1996. Lenalidomide is a derivative of thalidomide. Secondary patents could block access until 2026 – this is 71 years since the initial patent on thalidomide was granted in the US and 30 years after the initial lenalidomide patent was granted. These products are not available to the public sector patients mainly due to cost. A year’s supply of lenalidomide is priced at R882,000 in South Africa and less than R32,000 in India. Until 2016, patients in the private and public sector were able to obtain quality, effective and safe generics from India with a Section 21 authorisation. This, however was cancelled once the originator product was registered by SAHPRA through Key Oncologics. This access was successfully challenged by a group of patients who had previous access, however new patients who require lenalidomide access via Section 21 are not granted this right by SAHPRA. Compulsory licenses were granted in the US as well as Russia.

In 2018 the WHO published a ground breaking technical report on the pricing of cancer medicines and the associated impacts. (Download the report here (PDF): http://bit.ly/2RGe1lj) This report highlights the exorbitant annual sales of originator companies such as Celgene following the expiry of their principal patents. This company, with its patents, has now been acquired by Bristol Myers Squibb. (See Celgene, sold for $74 billion, leaves a legacy of chutzpah in science and drug pricing, http://bit.ly/2HSlf67)

Out of pocket expenditures for ongoing and expensive treatments such as lenalidomide create catastrophic financial burdens for cancer patients. See World Cancer Day 2019 – Financial and Economic Impact at https://www.worldcancerday.org/materials – Select Factsheets and scroll down.

The advocacy campaign, including patient stories and clinical perspectives, will be highlighted on the Cancer Alliance website at https://www.canceralliance.co.za/multiple-myeloma-and-lenalidomide-access-campaign/

The campaign ties in to the international World Cancer Day initiatives.

Sue Johnson was diagnosed with breast cancer in 2008 and with Multiple Myeloma in 2014. While she was initially able to access a generic lenalidomide treatment from India on a Section 21 authorisation from the Medicines Control Council at a price of about R5000 per month, this was revoked in 2016 when the originator product from Celgene, Revlimid, was registered in South Africa, at a cost of R882 000 per year. Sue died on 16th May 2018.

Please change to Retha Wessels on the other hand tried in vain to import her medicine from India. Read her story  Breaking bad: Cancer patients turn drug smugglers as treatment prices soar

The Cancer Alliance Fact Sheet Multiple Myeloma, with a look at Lenalidomide Access in South Africa covers the following sections:

Fact Sheet Multiple Myeloma, with a look at Lenalidomide Access in South Africa
Download graphics and memes for use on social media PNG (zip)
Tap to select the previous period
Next