Your cancer and your medical scheme

Availability and affordability of cancer care remain the two main determinants of access to cancer treatment in South Africa. This report investigates the access to oncology benefits of selected medical schemes and the associated impact on cancer patients.

We also offer specific recommendations to the main stakeholders involved in the access of private sector oncology. With concerted political will and collective effort, our vision for better solutions can be achieved. 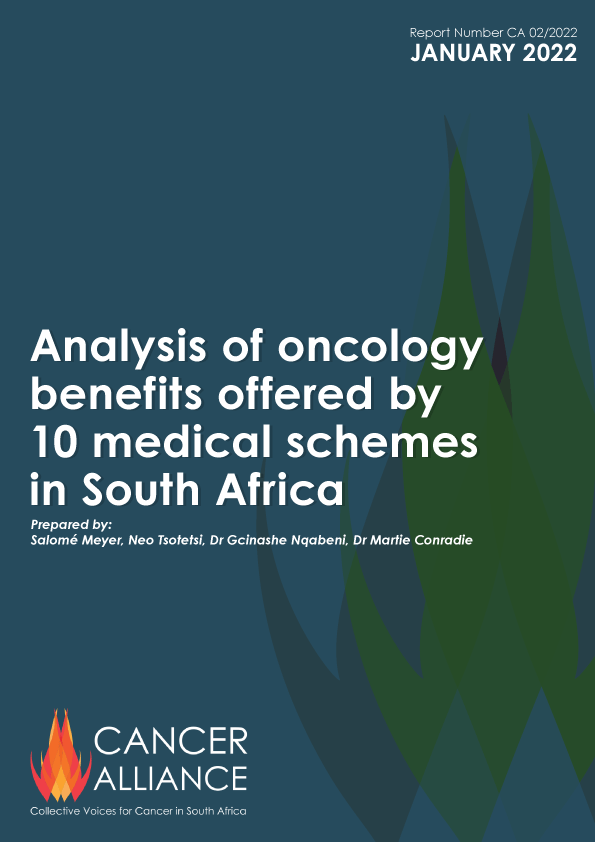 The Cost of Cancer: Where to From Here?

This seminal report unpacks the current and projected cost of cancer in South Africa, in monetary and human terms. It sounds a clear clarion call – cancer patients are suffering in a system that is inequitable and inefficient. With cancer cases predicted to double by 2030, unless dramatic action is taken the situation is going to get worse.

The report frames the need for standardised, quality cancer care within the constitutional right to health, highlighting that inequitable access means a violation of that right. The call is for a coming together of government and civil society partners, and health workers in public and private sectors, all centred on the patient voice, to create a road map for achieving quality, standardised and equitable access to cancer care for all. 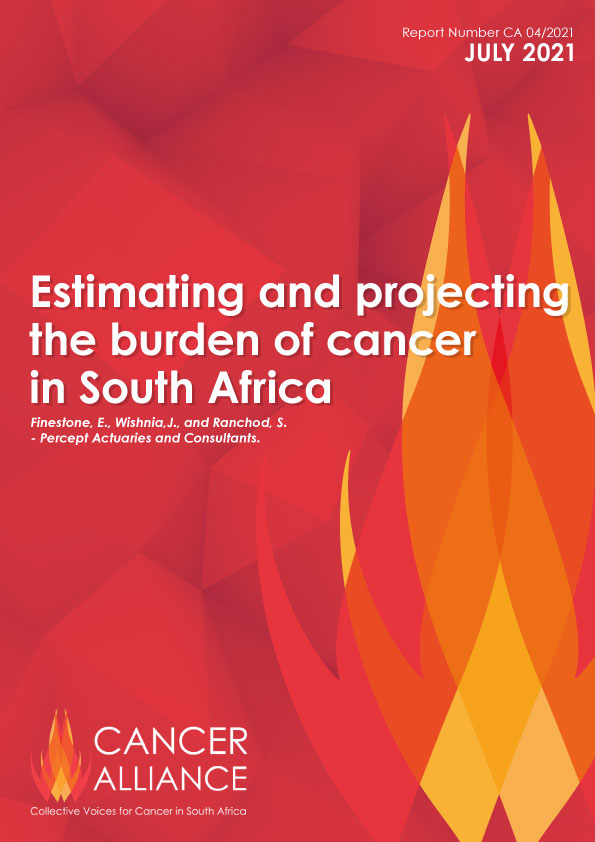 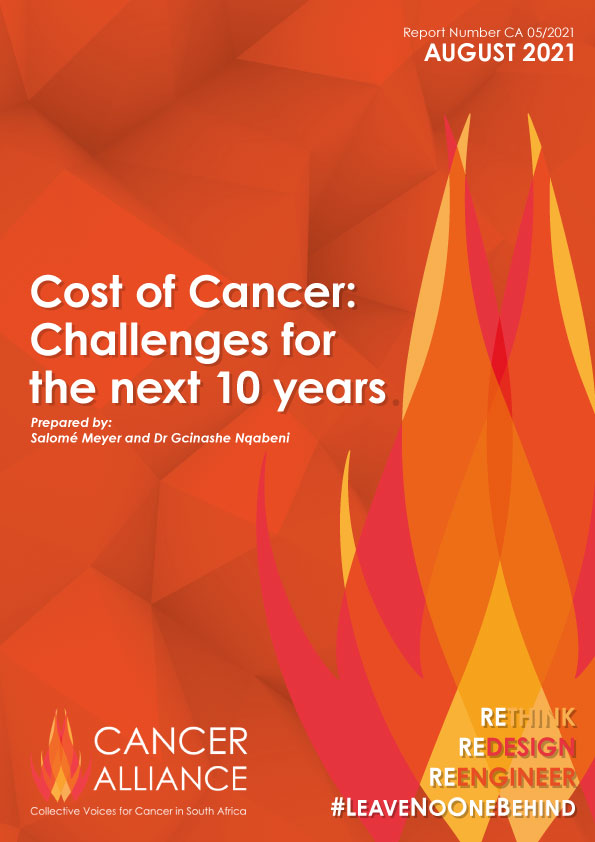 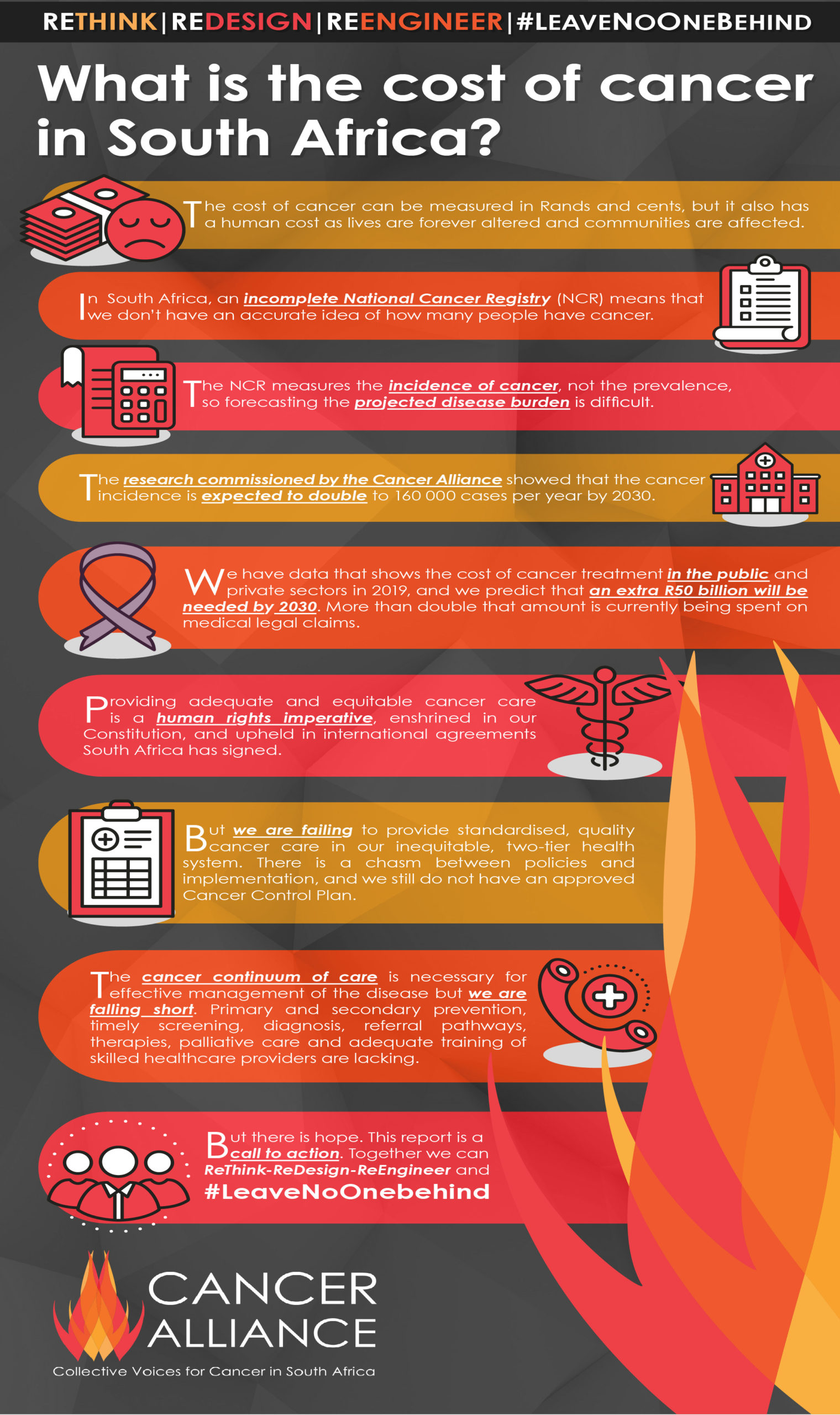 The webinar to launch the Cancer Alliance’s seminal report The Cost of Cancer: Where to from here? was held on Tuesday 7 September. Click to watch the recording. If you would like to access to the slides please send an email to info@canceralliance.co.za

“This report is not simply a campaign for an extra R50 billion as a vertical investment in cancer. It recognises that the full continuum of cancer care can only occur within a health system that focuses on primary and secondary prevention, has strong referral pathways and has robust systems for education and training all health workers.” – Dr Lydia Cairncross, Head of the Surgical Oncology Unit at UCT/Groote Schuur Academic complex and EquiHealth, a UCT Global Surgery project and an active member of the People’s Health Movement of South Africa.

“The scourge of cancer in South Africa is picking up speed. The rate of death from cancer continues to rise among both men and women, among all racial groups, and for many types of cancer … This report comes at a crucial time, when we need to be proactive if we want to turn this tide. If we don’t invest in personnel training and in cancer treatment research now, then we are doomed.” – Dr Richard M Khanyile, Head of Department of Medical Oncology, Steve Biko Academic Hospital, University of Pretoria

“It is a proud moment for us to release our next report – Cost of Cancer: Challenges for the next 10 years, after 10 years of advocacy about cancer access. It is very clear that we are facing a different pandemic. We cannot continue with what we have … South Africa has the knowhow and resources to do better for its people.” – Linda Greeff Chairperson, Cancer Allianc

Without action, the worldwide cancer burden is expected to reach 21 million new diagnoses and 13 million deaths by 2030[1], with the most rapid increases occurring in low- and middle-income countries. Cancer deaths worldwide for 2017 are estimated at over 25 000 per day, of which over two thirds occur in economically developing countries. South Africa is one of these countries. Cancer affects every South African either financially or emotionally in some way.[2]

In South Africa, the National Cancer Registry (NCR) which is kept by the NHLS, has collected information on cancer diagnoses since 1986. The NCR is a pathology-based registry, mainly collecting data of laboratory diagnosed cancers.

Successful advocacy led to the promulgation of the Regulations Relating to Cancer Registration, No. R 380 of 26 April 2011.[4] This regulation establishes the National Cancer Registry and makes provision for reporting by health establishments, healthcare workers and laboratories. It also paves the way for the implementation of Population-Based Cancer registries.

The National Public Health Institute of South Africa (NAPHISA) Bill will provide for the establishment of the National Public Health Institute of South Africa, including divisions dealing with inter alia … (d) Cancer Surveillance…, thus paving the way for the transition of the NCR to NAPHISA. A draft of this bill was published on 11 November 2015[5], followed by a second draft published on 15 March 2017[6]. Following a public briefing by the Dept. of Health and two days of public hearings the Bill is currently under consideration by the National Assembly.[7]

NCR data for 2013 indicates that the Life Time Risk for women developing cancer was 1 in 9, and for men was 1 in 6.

The most common cancers in South Africa